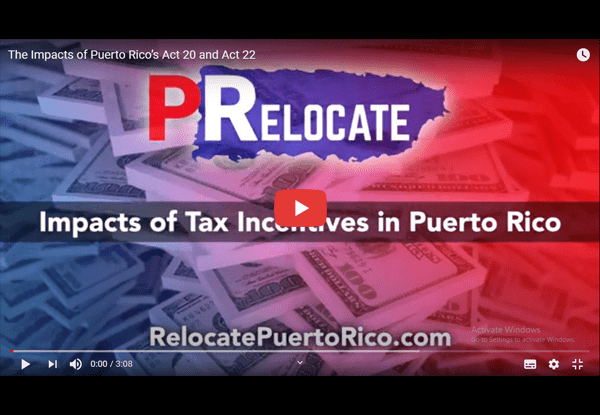 Since their enactment in 2012, Puerto Rico’s Act 20/22 tax incentives (now Act 60 Export Services and Individual Resident Investor) have exploded in popularity, culminating in a total of 4,503 decrees granted between 2012 and June 2019. They have granted decree holders a chance to experience a Caribbean island lifestyle facilitated by generous tax incentives and exemptions, but they have also contributed to the growth of Puerto Rico’s economy and wellbeing. A study by Estudio Técnicos Inc. (ETI) on the impact of Act 20/22 from 2015 to June 2019 has revealed that they have pumped new capital into the economy, have generated thousands of new jobs, and are helping Puerto Rico establish itself as a business hub.

The Impacts of Act 20

Act 20, now Export Services under Act 60, offers, among other benefits, a 4% corporate tax rate to businesses established in Puerto Rico that export services to clients located outside of Puerto Rico. While these services can take many forms, 40% of Act 20 businesses export consulting services. The focus on foreign clients means these businesses can bring significant amounts of capital to the island.

Between 2015 and mid-2019, 1,680 Act 20 decrees were issued. During this time period, Act 20 companies brought in an estimated $210 million in fiscal revenue to the Puerto Rican economy, and the total investment jumped from $500 million in 2015 to $1.2 billion in 2019. While Act 20 is generally targeted at enticing U.S. businesses to commence operations in Puerto Rico and export services abroad, local businesses that export their services have also taken advantage of the incentives, with 35% of all Act 20 decrees being held by local businesses, defined in ETI’s study as businesses “in which most of the capital is owned by Puerto Rican residents.”

Puerto Rico has historically suffered from a high unemployment rate, but Act 20 is tackling that issue, too. As of June 2019, Act 20 businesses have contributed a total of 36,222 much-needed jobs to the island, with each business generating an average of 10 jobs. According to Manuel Laboy Rivera, secretary of the Department of Economic Development and Commerce (DDEC), the goal is to increase the 7,400 created jobs in 2016 to 56,601 jobs by 2026, so Act 20 is clearly having the intended impact on job creation.

The impact is also substantial for everyday Puerto Ricans, as many have taken up relatively high-paying jobs at Act 20 companies. The jobs pay an average salary of $36,000, and considering that the median household income in Puerto Rico is less than $20,000, it is clear that ordinary Puerto Ricans can significantly improve their quality of life thanks to Act 20 companies.

Going forward, the impacts can only be expected to grow, as the DDEC estimates that a total of 2,776 Act 20 and Act 60 Export Services decrees will have been granted by 2029.

The Impacts of Act 22

Act 22, now Individual Resident Investors under Act 60, offers a 100% tax exemption on capital gains and income from dividends and interest. To be eligible, an individual must become a bona fide resident of Puerto Rico, which means spending at least 183 days a year on the island, establishing a tax home there, and demonstrating a closer connection to Puerto Rico than to any other territory by, for example, purchasing property, moving one’s family and belongings, and registering to vote. The objective behind the act is to entice investors who wish to relocate to Puerto Rico to offset the large-scale migration of Puerto Ricans to the US.

Act 22 (and now Individual Resident Investors) is open to people from around the world, but the majority of grantees who indicated their country of origin were from the United States, with Columbia and Singapore in a distant second and third place. Within the US, more than 40% of grantees hail from Florida or California.

Act 22 decree holders have also put significant amounts of money into the Puerto Rican economy, with an estimated $140 million spent on the island. The planned investment capital of Act 22 decree holders is estimated at around $687 million. Furthermore, 68% have purchased real estate property for an estimated total of $1.3 billion, with the remaining 32% renting, generating approximately $560 million in rental income each year.

ETI’s study also debunks the misconception of Act 22 decree holders being mega-rich individuals. Only 2.8% have a net worth of over $50 million, while the vast majority—80%—have a net worth of under $10 million. By dispelling this myth, the DDEC hopes to attract Puerto Ricans in the US who have a net worth of more than $1 million to return to and invest in their homeland, as long as they did not reside in Puerto Rico between 2009 and 2018.

By 2029, the DDEC estimates that around 2,660 Act 22 decrees and Act 60 Individual Resident Investor decrees under Act 60 will have been granted to individuals relocating to Puerto Rico. Many of these individuals are expected to open businesses, which will create an estimated 14,600 jobs. The aggregate amount of money spent by Act 22 decree holders and Individual Resident Investor decree holders on real estate between 2015 and 2029 is expected to reach $7.2 billion, and the yearly rent income is forecast to jump by $450 million by 2029.