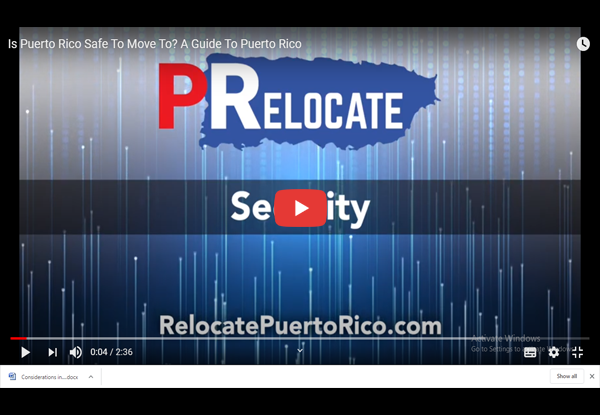 Moving to Puerto Rico is a huge life event, and there are many things you need to take into consideration. One particularly important thing to know before your big move is the level of security in Puerto Rico. These factors may influence where on the island you choose to make your home, so comprehensive research is advisable.

For the most part, Puerto Rico is perfectly safe, so don’t worry. However, there are some things you should be aware of, and you should take normal safety precautions as you would in any U.S. city.

Puerto Rico vs. the US

One of the most important considerations when deciding where in Puerto Rico to relocate is the crime levels. When researching security in Puerto Rico, you must keep in mind that crime is found in every major city, whether in Puerto Rico or the US. Puerto Rico, being a Caribbean island with a poor economy, often gets a bad reputation in terms of security, but in fact, 2018 FBI crime statistics reveal that the island has a lower crime rate than many U.S. states, including New York, California, and Texas.

Things to Watch Out For

Petty theft can be a problem in Puerto Rico, so avoid drawing attention to yourself by wearing expensive clothing or accessories, and keep your belongings with you at all times. Try to blend in with the locals so you don’t look like a tourist. If you can speak Spanish, now’s the time to put your skills to use—English-speaking tourists are more likely to be targeted by pickpockets.

Puerto Rico has a fairly high homicide rate, but this shouldn’t affect ordinary people, as it’s almost entirely related to gang violence and drugs. As long as you stay out of gang areas, you should be fine. Public housing areas, called “caserios” by the locals, are also known for their high crime rates, particularly San Juan’s Louis Lloren Torres. Other areas in San Juan to avoid at night include Piñones, Parque de las Palomas, La Perla, and Puerta de Tierra.

In contrast, Old San Juan, Isla Verde, Miramar, and Condado are considered some of the safest neighborhoods of San Juan at night and have regular police patrols. Bayamón and Dorado are also safe areas—our team lives in Condado, Bayamón, and Dorado. We have never experienced any problems here. If you have questions about these neighborhoods, don’t hesitate to send us an email at info@relocatepuertorico.com.

We want to stress, though, that we are simply pointing out these problems so that you are aware of them. Puerto Rico is no more dangerous than any other U.S. city, and if you feel safe in the US, you’ll feel safe in Puerto Rico, too.

An unfortunate reality of living in Puerto Rico is natural disasters, particularly hurricanes. The destruction the island sustained from Hurricanes Maria and Irma in 2017 is no secret. During hurricane season—June to November—keep an eye on the weather forecast, and take any warnings seriously. If a major hurricane strikes, you will probably lose power, so it’s a good idea to buy a generator to power your fridge and other essential appliances.

You should always keep an emergency kit, too, just in case. Make sure to include a first-aid kit, any medications you might need to take, a device to communicate with your family, important documents (in a waterproof container), and a flashlight, among other things.

Earthquakes are an additional threat to the otherwise peaceful life on this Caribbean island. All of Puerto Rico can experience strong earthquakes, although the island’s west coast is most vulnerable. If you are from the West Coast of the US, you’re probably already familiar with how to deal with earthquakes, but if this isn’t a hazard you have to consider in the US, here’s an overview of measures you can take to protect yourself and your home.

To prepare your home for earthquakes, secure heavy appliances such as your fridge to the wall. Use wall studs to secure your water heater in place to avoid possible ruptures to gas and water connections. Secure expensive electronics and any valuable items to prevent falls or other damage. You can use anti-skid pads or Velcro to secure electronics like TVs and computers.

You should also set up your bedroom so you will be safe if an earthquake strikes in the middle of the night. Position your bed away from windows and chimneys, and keep the blinds or curtains shut at night to help prevent broken glass from falling on the bed. Avoid hanging pictures, light fixtures, or anything else that could fall above the bed.

During an earthquake, if you are inside, drop to the ground. Cover your head and take refuge under a table, desk, or other sturdy piece of furniture. Hold onto it so you aren’t thrown around. If there is no suitable furniture to hide under, crouch against an interior wall. Do not attempt to leave the building—this is where many injuries occur. If you are outside during an earthquake, stay outside and distance yourself from any buildings. It’s dangerous to be around exterior walls.