How to Register to Vote in Puerto Rico

How to Register to Vote in Puerto Rico 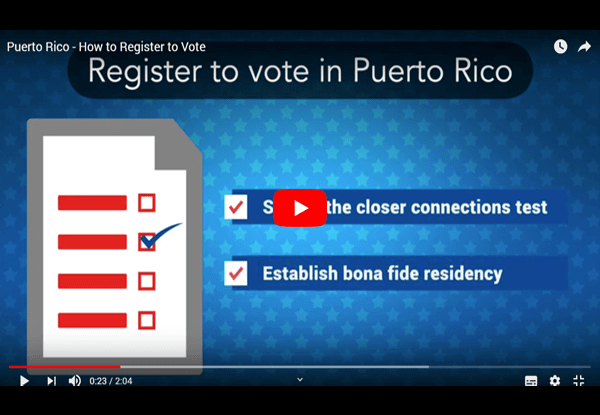 On Tuesday, November 3, 2020, Puerto Rico will hold an election to determine whether current governor Wanda Vázquez Garced, who holds her position not due to a vote but because the previous governor resigned, will remain Puerto Rico’s top government official. Also running for the New Progressive Party is Pedro Pierluisi. On the opposition side, Carmen Yulín Cruz, Eduardo Bhatia, and Carlos Delgado Altieri are running for the Popular Democratic Party. Two candidates of smaller parties have also declared their intention to run: Alexandra Lúgaro of Movimiento Victoria Ciudadana and Juan Dalmau Ramírez of the Puerto Rican Independence Party.

To vote in the election, you will need to complete your voter registration by September 14, 2020. To register, you must visit the Junta De Inscripción Permanente (JIP) office in your municipality. Bring ID and your birth certificate or passport to prove that you are a U.S. citizen, and provide the last four digits of your Social Security number and your physical and postal address. Upon successful registration, you will receive your voter card. Use this directory to locate the closest JIP office to you.

Even if you plan to be away from Puerto Rico by the time the elections roll around, you might still be able to vote, as long as you register for absentee voting. To register, you have to present all the above mentioned information in person at your local JIP office or via email to the Absentee Vote Administrative Board before March 12, 2020. Use the absentee voting request form to apply.

Absentee voting privileges are only offered in specific cases—you will not be able to vote in Puerto Rican elections if you are simply vacationing abroad. The following people may vote via an absentee ballot: