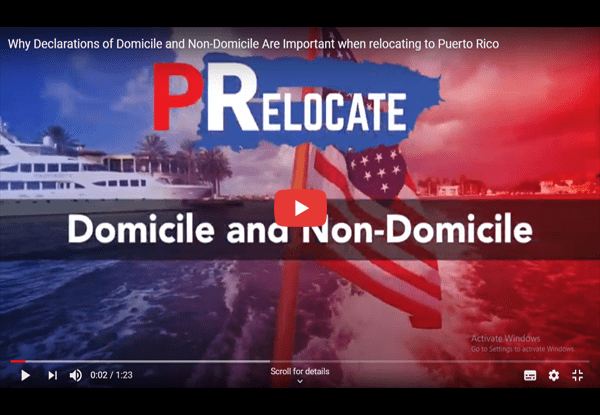 If you have moved to Puerto Rico to take advantage of the Act 60 tax incentives, you will be required to provide various forms of evidence of your bona fide residence on the island. One form of evidence you can use is declarations of domicile and non-domicile.

What Is the Declaration of Domicile?

The declaration of domicile is a formal document recognizing Puerto Rico as your official, legal territory of bona fide long-term residence. The document specifies your full name, the date you became a bona fide resident, your Puerto Rican address, your former city of residence, and the date on which you have executed the document. The document must be signed, sealed, and delivered in the presence of witnesses, who must provide their signatures, and must be sworn before a public notary, commissioner of oaths, or solicitor.

What Is the Declaration of Non-Domicile?

The declaration of non-domicile is a formal document recognizing your cessation of long-term residence at your previous state of domicile. The document specifies your full name, your previous city of residence, your Puerto Rican address, the date you became a bona fide Puerto Rican resident, and the date on which you have executed the document. The document must be signed, sealed, and delivered in the presence of witnesses, who must provide their signatures, and must be sworn before a public notary, commissioner of oaths, or solicitor.

Why Is the Declaration of Domicile Important?

The declaration of domicile helps prove that you are a bona fide resident of Puerto Rico, which is a requirement of the Act 60 tax exemption program. After meeting the requirements of bona fide residency—spending at least 183 days of a given year on the island, making Puerto Rico your tax home, and having a closer connection to Puerto Rico than the US or another country—you should execute a declaration of domicile to officially change your domicile.

Residency and domicile are not the same thing. Your residence is a home you intend to inhabit temporarily, whereas your domicile is your permanent home. For many people, these overlap, but it is important to declare Puerto Rico as not only your residence but also your domicile, indicating to the Puerto Rican government that you intend to reside long-term on the island.

Why Is the Declaration of Non-Domicile Important?

The declaration of non-domicile serves as an official document informing your former state of domicile that you no longer intend to reside there long term. State domicile regulations differ from state to state, but in some states, a declaration of non-domicile is important to void your income tax status in that state. Furthermore, in the US, it is not possible to have multiple domiciles at the same time, so declaring your non-domicile in your previous state is necessary to declare domicile in Puerto Rico.