How to Become a Bona Fide Resident of Puerto Rico - PRelocate 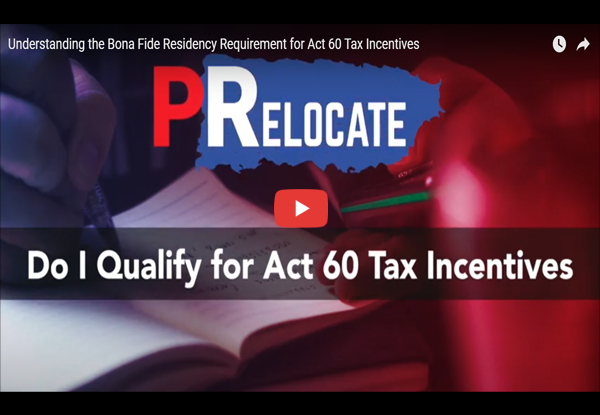 If saving big on income taxes while soaking up the sun on a U.S.-owned Caribbean island sounds like a dream life to you, relocating to Puerto Rico under the Act 60 tax exemptions may be right for you. Thousands of Americans have already made the move to Puerto Rico, enjoying a 0% income tax rate on capital gains or a 4% corporate tax rate for their business while indulging in the excitement of Puerto Rican culture and cuisine. But to those considering taking advantage of Puerto Rico’s generous tax exemptions without committing to a life on the island, be warned: Integrating into Puerto Rican life isn’t just a bonus. It’s a requirement.

Puerto Rico offers a myriad of tax incentives, but they all entail the same goal for the government: boosting Puerto Rico’s economy by attracting to the island high-net-worth individuals who will invest in the infrastructure. Thus, to reap the benefits of the ever-popular Act 60 Export Services and Individual Resident Investor tax exemptions, you must hold up your end of the bargain and settle into a life in Puerto Rico. Bona fide residency is the benchmark to determine commitment to the island, and it is measured by three tests: the presence test, the tax home test, and the closer connection test. All three are easy to satisfy if you truly commit to a new life in Puerto Rico.

The IRS offers five different conditions a decree holder can use to fulfill the presence requirement for bona fide residency. You don’t need to satisfy them all—satisfying just a single one is sufficient. Two revolve around the number of days a decree holder is present in Puerto Rico throughout the tax year:

Another bonus is the 30 free international travel days decree holders are eligible for if they spend more time in Puerto Rico than the US. These free travel days encompass travel outside of the United States but effectively mean that a degree holder need only spend 153 days in Puerto Rico, as long as the extra 30 days are spent outside of the US. Note, however, that if you’re going for the “549 days in a three-year period” condition, you must still physically spend at least 60 days in Puerto Rico each year.

Finally, exceptions are available for special circumstances, such as medical treatment or disasters. The COVID-19 pandemic, for example, qualifies as “special circumstances” that can grant an Act 60 decree holder free presence days under certain conditions.

Basically, to satisfy the tax home test, keep your office—or your home, as the case may be—in Puerto Rico.

Naturally, some of these factors are more important than others—the IRS will especially consider where a decree holder’s spouse and children live. Selling or renting out your home in the US is also a good idea, as not having a home readily available in the US will certainly boost your standing in the assessment of a closer connection.

The “Year of the Move” Exception

Given that one of the requirements for bona fide Puerto Rican residency is to maintain a tax home in Puerto Rico for the entire tax year, satisfying this test in the year of your move is clearly impossible unless you move on January 1. That’s why IRS has introduced a special exception for your first year in Puerto Rico, contingent on three conditions:

This means that as long as you move to Puerto Rico before July 1, you can become a bona fide Puerto Rican resident in your first year on the island and reap the benefits of your Act 60 decree immediately.

Don’t Pass Up a Lucrative Life in Puerto Rico

Puerto Rico’s bona fide residency tests may seem intimidating, but if you’re dedicated to starting fresh in the US’s sunny Caribbean island territory, the tests are simple. With beautiful, sunny weather, a vibrant Hispanic culture, and generally lower prices than in the mainland, Puerto Rico offers more than just tax savings. And since its generous tax incentives are only available to bona fide residents, enjoying the wonders of a Puerto Rican life is imperative. In more ways than one, starting a new life in Puerto Rico can be the best investment you ever make.