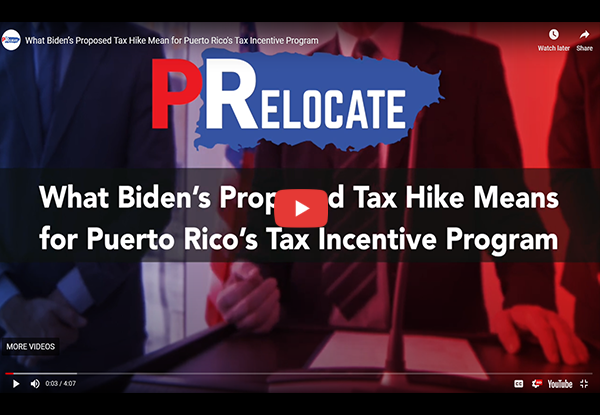 Read on to see how unrivaled tax incentives and unprecedented federal government investment make Puerto Rico a more desirable location than ever for prospective residents.

It’s Never Been a Better Time to Relocate

What Impact Has Biden Had?

Moving to Puerto Rico under the Act 60 Tax Benefit Program

Why Are Americans Choosing to Move to Puerto Rico under Act 60?

It’s Never Been a Better Time to Relocate

If keeping more of your income appeals to you, you might have already researched Puerto Rico’s Act 60 tax incentives. The program boasts a 0% capital gains tax rate and a 4% corporate tax rate for qualified recipients.

Thousands of Americans have already moved to the U.S.-owned Caribbean island to take advantage of Act 60’s tax benefits. Puerto Rico’s stunning beaches, year-round sunny weather, and vibrant culture are a few of the other perks of living here.

That’s not all. Many federal agencies are on the island and work closely with local governments. Under the current administration, the federal government has poured additional funding into Puerto Rico, reflecting the island’s great potential.

All of this means you’ll be well-positioned to reap benefits across the board as a new resident of Puerto Rico. Between the unparalleled tax incentives and the growing investment here, it’s never been a better time to move to the Island of Enchantment.

What Impact Has Biden Had?

The occasional major storm, such as Hurricane Maria and Hurricane Irma, is an unfortunate fact of life on the island.

Since Biden was elected president, Puerto Rico has received considerable federal aid in the wake of natural disasters. Federal assistance to the Puerto Rican government and people will strengthen the island’s capacity to respond to future storms and other crises.

Under President Biden Puerto Rico residents have also benefited from the American Rescue Plan. This plan is helping the island’s economy recover from the COVID-19 pandemic and earlier financial problems; Puerto Rico’s debt crisis in 2014 led to Congress’ passage of the Puerto Rico Oversight Management Economic Stability Act (PROMESA) and the creation of the Financial Oversight and Management Board.

The American Rescue Plan has provided the following benefits to Puerto Ricans, and more aid is on the way.

Federal aid to Puerto Rico has included changing federal tax benefits on the island. The American Rescue Plan has issued tax credits to hundreds of thousands of Puerto Ricans.

The Biden-Harris Administration extended the Child Tax Credit (CTC) to each Puerto Rican family with at least one child, mirroring benefits on the mainland. At the end of 2021, eligible Puerto Rico residents could claim up to $3,600 per child.

The Biden White House has also expanded Puerto Rico’s version of the Earned Income Tax Credit (EITC). Recent annual federal funding of $600 million under the American Rescue Plan has enabled Puerto Rico to more than triple EITC benefits for workers on the island, raising the maximum EITC for a family with two children from $1,500 to $5,500.

Combined, the CTC and EITC provide over $1 billion in tax relief to Puerto Rico each year.

Under President Biden and Vice President Harris, the government provides about $3 billion in additional funding to Puerto Rico’s Medicaid program annually, adjusted for inflation. This will help to ensure that 1.5 million residents of the island receive access to healthcare services.

The Biden Harris Administration has moved swiftly to implement the Bipartisan Infrastructure Law, which is creating jobs in construction, manufacturing, and transportation, as well as providing $688 million in funding to Puerto Rico. During 2022 alone, Puerto Rico received the following benefits under this legislation.

Small businesses are critical to Puerto Rico’s economy. Fortunately, their prospects are improving thanks to increased federal aid.

Puerto Rico has received a great deal of assistance that will help it to bolster economic growth. This investment is speeding Puerto Rico’s recovery from natural disasters and making the island a more comfortable and developed place to live for current and future residents.

However, Puerto Rican residents do not receive disability benefits under Supplemental Security Income (SSI). In 2022, the Supreme Court ruled 8-1 that Congress isn’t obligated to extend SSI benefits here (backing an earlier Justice Department position), because most Puerto Ricans are exempt from paying federal taxes. That’s not the case for their fellow Americans on the mainland.

Thus, Puerto Rico doesn’t receive SSI benefits. Those who reside in other U.S. territories, such as Guam and the U.S. Virgin Islands, generally don’t receive these either.

Moving to Puerto Rico under the Act 60 Tax Benefit Program

Puerto Rico has maintained its special Act 60 tax incentives program. As John Paulson, head of Paulson & Co. and a major supporter of Act 60, remarked in 2016: “[Puerto Rico is] the only place a U.S. citizen can go and avoid, legally, all their taxes.”

U.S. citizens can’t avoid all taxes here, but there’s no question that the program is very generous. To move under the Act 60 Individual Resident Investor Tax Incentive or the Export Services tax program, a decree holder must commit to living on the island. To qualify for Act 60, you must satisfy a series of requirements, including the presence test, the tax home test, and the closer connection test.

For the presence test, the most important consideration for the IRS is that you spend more time in Puerto Rico than in the rest of the United States. Satisfying just one of the following five criteria will be sufficient to pass the test.

Even a brief stay—for example, an hour during an airport layover—counts as a “presence day” in Puerto Rico toward one of the first two requirements.

These are rules of thumb. Disasters and medical issues are special conditions that can yield free presence days for decree holders.

The tax home test requires decree holders to maintain their tax home in Puerto Rico for the entire tax year. The decree holder’s tax home is where they work and create value—the main place of business, employment, or post of duty, according to IRS rules.

If you don’t have a primary place of employment, the IRS will consider your primary residence your tax home.

To pass the closer connection test, you must demonstrate to the IRS that you have more robust ties to Puerto Rico than to the rest of the United States.

To help satisfy this test, a decree holder can sell their U.S. house, obtain a Puerto Rican driver’s license, or register to vote in Puerto Rican elections, among other measures. The IRS will also consider where your immediate family members and personal effects are. As your close connections to the mainland decrease, so too will your risk of an IRS audit.

You (or you jointly with your spouse) will also need to buy property in Puerto Rico to use as your main residence within two years of obtaining your Act 60 decree. This property must be your primary residence for as long as your decree remains in effect.

Act 60 also requires decree holders to pay various fees. The largest of these is a mandatory donation of $10,000 split between two qualifying Puerto Rican nonprofit organizations annually for as long as the decree remains in force.

Why Are Americans Choosing to Move to Puerto Rico under Act 60?

Americans have been relocating from the mainland to the island in droves for various reasons. The greater San Juan area has proven to be especially popular among American expats, thanks partly to its vast selection of real estate, low-cost and high-quality health care, and abundant services.

In 2021, many Americans moved to Puerto Rico amid record gains in the stock market and many cryptocurrencies to benefit from staggering tax savings here.

In 2022, others relocated to the island to escape high inflation on the mainland and benefit from Puerto Rico’s overall low cost of living.

Still other U.S. investors and businesses have moved to Puerto Rico to take advantage of the island’s gorgeous weather, fine dining and shopping, and vibrant culture, in addition to its tax benefits.

If you have kids, Puerto Rico’s schools also include elite institutions with strong track records of sending their graduates to prestigious universities.

To recap, Puerto Rico under the Biden administration has become a more desirable place than ever for prospective island residents.

You’d follow in the footsteps of thousands of other Americans who have been thrilled with the huge tax breaks they’ve received since becoming bona fide residents of this U.S. island territory.

With federal funding pouring into Puerto Rico to make it an even safer and more prosperous place, this is the ideal time to prepare your move to the Island of Enchantment.

Consider moving to the island early in the year to take advantage of these many benefits and more easily fulfill the residency requirements. Act 60’s residency tests are easier to satisfy than you probably think. Once you do so, you’ll be able to call this Caribbean paradise home and keep more of your income.

If you have additional questions about your move to the island, contact us today.