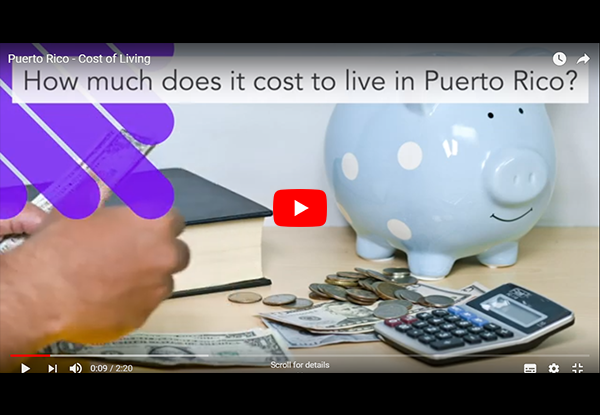 One of the additional draws of moving to Puerto Rico under its generous tax incentive programs is the fact that you will also get to enjoy an overall lower cost of living than in the US. Not only will you save money on your taxes, but that money will also go further in Puerto Rico. However, Puerto Rico isn’t dirt-cheap, so it’s best to do your research beforehand to avoid having your illusions shattered once you arrive on the island.

Puerto Rico vs. the US

The United States is not known for its low cost of living, so for the most part, you can enjoy a cheaper life in Puerto Rico. That being said, Puerto Rico is still more expensive than the majority of countries around the world and is one of the most expensive areas in Latin America, so don’t expect things to be as cheap as they would be in Thailand or Vietnam.

Numbeo, which allows users to compare living expenses between cities, ranks San Juan as between 27% to 76% cheaper than New York City and 6% to 66% cheaper than Los Angeles in various domains. Of course, San Juan is the most expensive city in Puerto Rico, so if you settle for a smaller city, your cost of living will go down. For example, Aguadilla, a beach town on the island’s west coast, has a significantly lower cost of living than San Juan.

The price of food is roughly the same as in the US. The island has many supermarket chains, such as SuperMax, Pueblo, and Supermercados Econo, whose websites you can check to get an idea of what Puerto Rican supermarkets offer and what their prices are. Freshmart is a bit more expensive, but it offers organic, gluten-free products, grass-fed meats, and free-range eggs.

If you would like to buy healthy, fresh, local produce, be sure to check out Puerto Rico’s many farmer’s markets as well. They can be found all across the island, and Puerto Rico’s tropical rainforest climate allows for a wide range of produce to be grown.

You can also find American staples such as Walmart and Costco if you’re looking for something more familiar. The island has four Costco locations: Carolina, East Bayamon, West Bayamon, and Caguas. Walmarts can be found all across the island, just like any U.S. state.

Health care is significantly cheaper in Puerto Rico than in the US—expect to save up to 30%, depending on your current state. The standard is similar to what you would receive in the United States, although conditions do vary across the island. You will receive the highest-quality health care in San Juan.

The quality of public health care in Puerto Rico is quite high, but because the island is facing a shortage of doctors, waiting times tend to be long. It may be worth considering private health care to avoid the long wait times. Medical insurance is generally affordable, and Puerto Rican insurers are generally more likely to cover pre-existing conditions than insurers in the US. Bear in mind, though, that some healthcare providers do not accept card payments, so it’s a good idea to bring some cash along.

Puerto Rico is a great place to get—or stay—fit. There are tons of gym options around the island, particularly in San Juan, and if you get a membership at a gym like Planet Fitness or Crunch, you can spend as little as $10 per month. Another unique and affordable fitness option is Deep Lifestyle, a dance-style workout group that promotes physically and mental wellbeing. The workouts are geared toward women, but interested men are also invited to join. The island also features various wellness centers and other activities such as yoga at reasonable prices.

Other popular gyms in Puerto Rico include HCOA Fitness, Liv Fitness, and Phyt Gym. HCOA Fitness has 14 locations all across the island, with a multitude concentrated around the San Juan area. It offers various classes and a free pass to try the gym out for free for three days. After that, you will have to pay for membership, which starts at $30 a month.

Liv Fitness is known for its clean and high-quality facilities, and the gym offers members everything from indoor swimming and racquet sports to kids active programs and babysitting services. Prices can vary depending on your plan, but you’re typically looking at something between $30 and $80 per month.

Phyt Gym is a popular gym in San Juan that features abundant space and top-quality exercise equipment. You can train independently or work out with a personal trainer, whether you’re just starting out or are a professional athlete. The gym also offers nutrition services so you can maintain a clean diet, too. Day passes are $15, and monthly passes are $30.

One of the best ways to get around in Puerto Rico is Uber, and you can use the website to calculate the rate for your route. However, Uber is not available throughout the entire island—if you’re in the southwestern quadrant, you will need to find alternative transportation.

When Uber isn’t available, there are always taxis. Within San Juan, you will pay metered fares, but outside of the capital, there are typically no meters. Taxi drivers only accept cash, and don’t forget to include a tip. Taxi drivers might be nicer to you if you speak Spanish, so be sure to flaunt your Spanish skills if you have any.

Of course, since you are residing in Puerto Rico long-term, it may be worth it to just buy a car. If you don’t want to splurge on a new car, it’s easy to find a used car to purchase in Puerto Rico. You will also need a driver’s license and a “car tag” (marbete).

While most things in Puerto Rico are cheaper than in the US, sales tax is higher, at 11.5%, so you will need to factor that into your purchasing decisions. The sales tax on prepared food is lower, though, at 7%, thanks to a new regulation that went into effect in October 2019. Restaurants that offer this lowered tax rate will display a sign to notify patrons.