Best Practices for an IRS Residency Audit - Relocate to Puerto Rico with Act 60, 20, 22 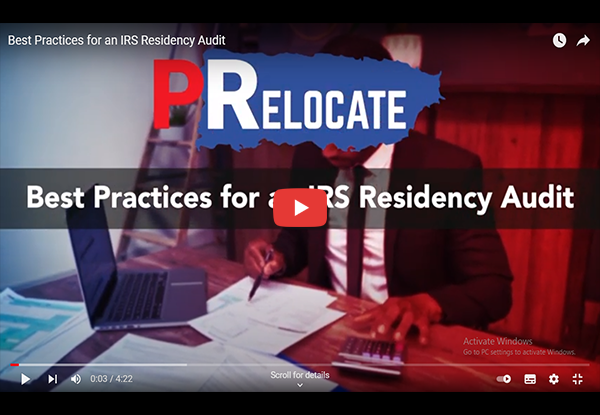 It is common knowledge among tax accountants and experts that high-net-worth individuals moving to a low-tax state will almost certainly be audited. High-tax states such as California, New York, and New Jersey are carrying out residency audits more and more aggressively—these states stand to lose millions in tax revenue as many of their wealthy citizens relocate to Puerto Rico for the island’s tax savings and charming culture.

Use Location Services on Your Phone

Accounting Today states that “auditors now rely heavily on cell phone tracking, which can reveal not only where calls are made and received, but in some cases track data even when you are not using your phone.” All Act 60 participants should allow location services on their phones and find a way to track and access such data.

Several apps such as Monaeo, TaxDay, and TaxBird have been developed to help individuals prove their location for tax purposes. Often billed as “personal audit defense systems,” these apps track users’ days spent in each state and alert them as they near their 183-day limit.

According to Manaeo co-founder Nishant Mittal, “Clients who have used Monaeo’s data in audits have had [a] 100% success rate in defending their non-residency or part-year residency status. We’ve helped clients save more than an estimated $100 million dollars to-date.”

Minimize Ties to Your Former State

Enroll your children in Puerto Rican schools and engage in local social clubs. Bring items of sentimental value to your new home in Puerto Rico, including jewelry, works of art, heirlooms, valuable collections, and any pets. Classify your former home as a rental property. Further, retain a brokerage agreement and proof of attempts to rent the property, if not actual rental income.

Regarding Act 60 participants’ businesses, most states (including New York and California) ascribe more importance to an individual’s day-to-day active participation rather than to their passive investments. If an Act 60 resident formerly owned or led a business still active in any state, they should document any and all contact with that business, including the various purposes of each phone call or meeting.

Your first few years in Puerto Rico will be crucial to establishing the island as your bona fide domicile. “The first one or two years, you shouldn’t come back very much,” advises Michael Kosnitzky, a partner at Pillsbury Winthrop Shaw Pittman. “You have to prove that you’ve left. After that, the burden of proof shifts to the state.”

How to Prove Your Location to New York and California

Even though many states make it difficult to prove your location, New York State has by far the most restrictive regulations. Due to the large number of daily interstate commuters it receives, New York State considers even one minute spent inside its borders as an entire day. Entering the state at midnight counts as two days, and the only exceptions to these rules are for airport travel and overnight medical stays. Act 60 participants with secondary homes or businesses in New York should retain as much to-the-minute location data as possible, especially when working or traveling in the tri-state area near New York City, including New Jersey and Connecticut.

In contrast, Deloitte Tax principal Chris Campbell describes California as “much more subjective. Generally speaking, you can be a resident of California for tax purposes after a few days or months.” This means that the purpose of your time in California is often more important than how much time you spend in the state. According to California law firm Sanger & Manes, Act 60 participants and other California non-residents visiting the state for work or family reasons need to prove that “a stay in California not only looks like it’s for temporary purposes, but in fact is for temporary purposes, as a matter of law.”

When carrying out residency audits, auditors rely on a bevy of records such as credit card statements, flight occupancy records, doctor’s records, E-Z Pass records, swipe cards, and even social media. You should retain such records for three to eight years or even longer starting from the time you leave your former state.

The evidence that Act 60 applicants must gather to prove their status as bona fide Puerto Rican residents can be invaluable in the case of a residency audit. Examples of valid evidence include changing your voter registration, driver’s license, principal bank accounts, television and internet utilities, safe deposit boxes, mailing address, places of work, charitable contributions, religious or athletic club affiliations, and even the location of family gatherings to reflect your move to Puerto Rico.

Between 2014 and 2019, the New York State Department of Taxation and Finance launched more than 3,000 residency audits on high-net-worth individuals each year, resulting in more than $1 billion in reclaimed tax revenue. New York wins more than half of its residency audits, collecting an average of $140,000 in each win. Audits can cost taxpayers up to $25,000 in fees alone, not including the actual settlement. Additionally, they can take up to five years to complete.